Foster Inducted into Hall of Fame

Congratulations to Ed Foster on his induction into the Nebraska Cooperative Council Cooperative Hall of Fame!  Ed served as General Manager of Farmland Service Cooperative, which became All Points Cooperative, from 1985 to 2013.  Through another merger in 2016, All Points became what is Country Partners Cooperative today. 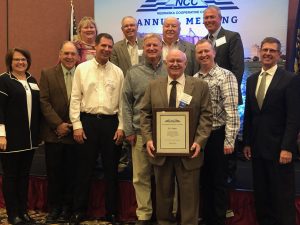 The NCC Cooperative Hall of Fame serves as a means to recognize those, who because of extraordinary contributions of time and talent, have advanced the interests of Nebraska’s farmer owned cooperatives and their respective farmer members; who have strengthened the cooperative industry; and who have distinguished themselves and the cooperative system.

During his tenure as General Manager, Ed provided leadership and vision for the cooperative to grow to continually provide the best possible service to its member owners.  This included facility expansions such as the train shuttle loader and dry fertilizer storage shed, both in Gothenburg.  There were also business growth opportunities:  the merger of Farmland Service Cooperative with All Points Cooperative and the acquisition of AgriAlliance in Cozad and Arnold. 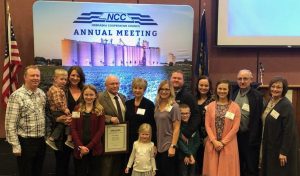 Current Country Partners Cooperative CEO, E. Tod Clark said, “From my observations, Ed always ran his decisions through the filter of ‘what is best for the long-term interests of our owner/members?’ During his career, Ed led the coop through some challenging economic times and upon his retirement left the company with one of the strongest cooperative balance sheets in the state of Nebraska.”

Ed’s efforts to strengthen the Nebraska cooperative business model didn’t stop with local efforts in the Gothenburg area.  He served on the Board of Directors for Nebraska Cooperative Council, including leadership roles as Vice Chair, Chair of the Political Action Committee and Co-Chair of the Legislative Advisory Committee.

“Ed’s lasting contribution will be the strength he helped build in the cooperative business model in Nebraska,” according to Clark.

Your browser is out-of-date!

Update your browser to view this website correctly. Update my browser now