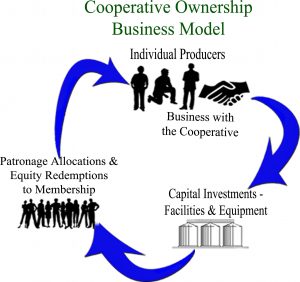 These are uniquely cooperative attributes!

The 2019 national theme for Cooperative Month is “Co-ops:  By the Community, For the Community”.  This theme is particularly appropriate for the agricultural cooperative system in Nebraska where we have 38 ag coops with the number of farmer and rancher member owners of those cooperatives totaling over 57,000 Nebraskans.  The partnership between locally owned coops, the producers who own them and the communities they serve form the backbone of the rural economy in Nebraska.

With locations in 398 rural communities, an increase of 24 communities over the last 4 years, cooperative payrolls in Nebraska in 2018 were $330 million, covering nearly 5,300 employees statewide.  Local property taxes paid by ag coops totaled approximately $15 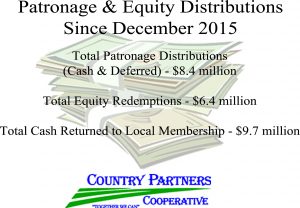 million.  In 2018 Nebraska’s ag cooperatives collectively reinvested $162.9 million in new facilities and equipment and made cash payments of over $57 million to member owners.

Since 2015, Country Partners Cooperative has invested just over $52 million in facilities and equipment to partner with our member owners in their operations’ success.  In that same time period, we’ve also returned $9.7 million in CASH payments to local producers in the form of equity and patronage allocations. 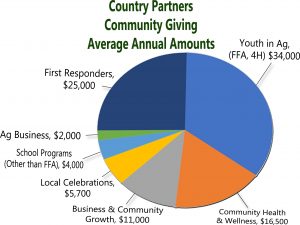 scholarships – totaled in excess of $1.17 million.  On an annual basis, Country Partners Cooperative contributes nearly $100, 000 to the communities it serves, including $34,000 to FFA and 4-H chapters and $25,000 to local volunteer fire departments.

Nebraska also hosts business activities of some of the nation’s largest producer owned cooperatives, such as CHS, Inc., Land O’Lakes, CoBank, Farm Credit Services of America, Growmark and Ag Processing, Inc. based in Omaha.  AGP is the largest federated soybean processing cooperative in the world.  Nearly all the local farm cooperative associations in Nebraska are owners of these regional cooperatives.

KOLN TV in Lincoln will be airing segments focusing on the cooperative business model on their Pure Nebraska program during the month of October.  The program airs weekdays from 9 – 9:30 a.m. and the features highlighting Nebraska cooperatives are scheduled to air on Thursdays throughout October.

Watch the first of these segments by clicking on the link below.  Check back here each week for links to additional Pure Nebraska segments as they are aired, including one featuring Country Partners’ CEO and General Manager E. Tod Clark.

Your browser is out-of-date!

Update your browser to view this website correctly. Update my browser now